As we start May, this month we will focus on mothers in the daily Bible verse. To start the study, let’s look at a verse from Genesis about Eve, the first mother.

What an honor to be the first mother. Can you imagine being the first mother ever? No one to share their wisdom from raising children, no one to give you advice on how to get your baby to sleep.

We celebrate Eve as the first mother of all people. What an amazing honor and responsibility.

In today’s verse, we see why Adam named his wife, Eve.

The man called his wife Eve because she would be the mother of all the living.

In this one moment, Eve and then Adam, would cause all humanity to be born with sin nature. When God finds them, he curses the serpent, the woman and the man.

In verse 15, God says he will put hostility between the seed of man and the Seed of the women (NKJV). God is explaining there will be ongoing battle between the redeemed and the lost (good and evil). A battle of worldviews that continues today.

But this story doesn’t end here. In Genesis 3:20, Adam says that Eve will be the mother of all the living. God isn’t finished with Eve’s story. Thousands of year later, it is the Seed of a woman, Jesus, that redeems us from our sin and brings us into right standing with God.

As you struggle with motherhood today (all mothers feel incapable and like they constantly make mistakes), remember Eve and her struggle. Despite her sin, God redeemed her and used her story just like God wants to redeem you and use your story. 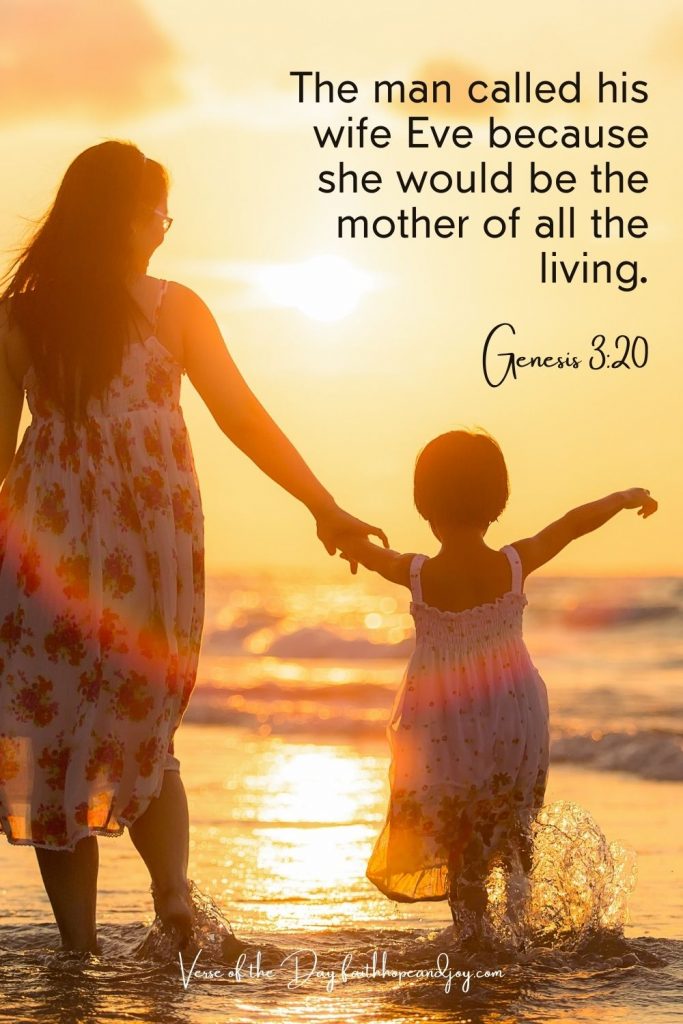 Rachel helps Christian women by showing them how to grow their faith, walk-in hope and live joyfully every day. She shares practical ideas for daily Christian living.

May I help you find…

This blog particates in affiliate marketing including Amazon Associates. Some links may be affiliate links. If you click a link and make a purchase, I earn from qualifying purchases. Read my full disclosure policy here.

This website uses cookies to improve your experience while you navigate through the website. Out of these cookies, the cookies that are categorized as necessary are stored on your browser as they are essential for the working of basic functionalities of the website. We also use third-party cookies that help us analyze and understand how you use this website. These cookies will be stored in your browser only with your consent. You also have the option to opt-out of these cookies. But opting out of some of these cookies may have an effect on your browsing experience.
Necessary Always Enabled
Necessary cookies are absolutely essential for the website to function properly. This category only includes cookies that ensures basic functionalities and security features of the website. These cookies do not store any personal information.
Non-necessary
Any cookies that may not be particularly necessary for the website to function and is used specifically to collect user personal data via analytics, ads, other embedded contents are termed as non-necessary cookies. It is mandatory to procure user consent prior to running these cookies on your website.
SAVE & ACCEPT
Scroll to Top